The easy but important stuff first: Linking this blog to important pieces that I have published in my official capacities.

November 26, 2014, I published the following text in The Huffington Post, where it appeared as “An Insider’s View on UN Policing” (http://www.huffingtonpost.com/stefan-feller/an-insiders-view-on-un-po_b_6278716.html).

The underlying schemes will resonate through, I guess, many entries that I will be publishing here: Which are the common denominators that should define policing, police institutions, and justice institutions? In Kosovo between 2000 and 2004, I was in command for on average 4.500 police officers who were sent to the United Nations Interim Mission in Kosovo (UNMIK) from up to 54 different countries from all around the world. It was my first experience with what it means to establish an international police organisation from scratch, with no blueprint. Moreover, this Police within UNMIK was supposed to be the real Police in Kosovo: The former Police had been a brutal and repressive element of Milosevic’s regime, and had participated in abuse, oppression, and atrocities. So they had to leave after the NATO air strike was successful. Which left Kosovo without ANY policing, apart from illegal structures that sprang up like mushrooms. There never is a void that is left unfilled…

It was my first experience with what it means to harmonise different approaches, cultures, understandings, values, education, managerial styles, operational practice, and tactical engagement. For the outsider it looked like a “Mission Impossible”, and yes, it was daunting, by all accounts. But it was also, in my view, surprisingly successful.

On basis of many similar experiences thereafter, a network of likeminded friends and I, who had been in command of such operations, identified the most pressing task: What is the least common denominator for policing that we all should accept, wherever we come from?

The below article gives actual insight in where we are on that. However, it is no coincidence that I wrote this article as well at a time during which I witness an intense discussion on Police accountability on occasion of incidents which happened lately in Ferguson, New York, and Cleveland. I am witnessing a fundamental discussion here in the U.S., one in which these incidents are perceived as results of a disguised racism, and insufficient accountability. The public reaction is encouraging, a large and peaceful movement has expressed the views of many citizens, white and coloured alike. Last weekend, I walked up Fifth Avenue in New York as a part of what the press describes as 25.000 peaceful protesters. 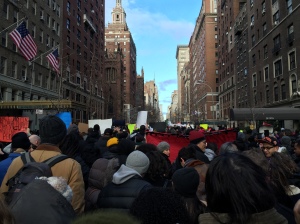 I am witnessing much more, and all that is profoundly encouraging. So, here my piece in the Huffington Post:

“Justice is both a concept and a function sitting at the core of any society. Whichever form it takes, it contributes to the fundamental connection of an individual or a community to the larger whole. We may take our understanding of justice as a given, or we may even assume that the specific understanding that we grew up with should apply to all others. The reality is that justice comes in many different conceptual shapes, and forms, based on ethical or moral values, or a combination thereof. The world is an arena for different forms of justice and judicial concepts, within larger ideological and secular and religious frameworks. These memes coexist, they compete, at times they fight each other.

As a value in itself, it is inextricably linked to the absence of it, to injustice. Here, things become challenging: Injustice may for example occur if an individual is not treated in a just way. Being treated “justly” includes appropriateness of the rules one is subjected to and that the given rules are universally applied. Equally important is that the feeling of whether an individual or a group is treated “justly”, or not, is often based on complex and very subjective perceptions. What matters most is that injustice, or the perception of injustice, creates the feeling that one does not belong. In my line of work, United Nations Peace Operations, this often is one factor leading to violent conflicts and the difficulty to move from conflict to lasting stability and peace.

The same holds true for security: security and insecurity, as well as the subjective perception of whether to feel secure or insecure, are critically important for any development of lasting peace. Individual members and communities define their belonging to a society including through whether they are safe, and that their concerns on safety and security are appropriately addressed by the society to which they belong.

Therefore, institutions of governance which provide security and adjudicate justice are of critical importance for development into lasting peace and security. For the United Nations, conflict prevention and sustainable peace comprises measures for the prevention of (armed) conflict and addressing its root causes, including through strengthening the rule of law, national reconciliation, good governance, democracy, gender equality and respect for, and protection of, human rights.

The United Nations is looking back on almost 55 years of deploying international police into peace operations. There are currently over 13,000 UN police from ninety-one Member States of the UN in eighteen peace operations all over the world. We operate globally, in the harshest, most challenging and most dangerous environments. We take casualties. We live in those communities where we contribute to their re-establishing forms of governance that lead to lasting peace. We protect vulnerable communities and individuals being targeted by violence and victimized by the abuse of power. In this, more recently, peacekeepers including police officers have become direct targets of those who try to deprive communities of their right to receive good governance. We face being in the cross-hairs of extremists and terrorism, as we are directly inhibiting their actions to suppress freedom and to subjugate communities under the reign of terror. We assist in the establishment of institutions of just and secure governance that contribute to lasting peace and security, after and during violent conflict. We face the menacing nexus between transnational organized crime and extremism and terror, and the often endemic corruption on which both can thrive.

We have learned the hard way which policing concepts work, for security and justice, and which do not. Consequently, we have put our experiences into a consultative process that, literally, includes the world. Our distilled essence is a policy that is based profoundly on what the Global Community understands as the common denominator of policing. On that basis we continue to shape how to promote this form of UN policing. Naturally, this relates to the peace operations in which we take risks. But what we say is also relevant for all police-related policy discussions, simply because we all agree to it.

On 20 November 2014, the United Nations Security Council had its first ever thematic discussion on policing and peace operations. In an overwhelming show of engagement, every member of the Security Council took the floor. The Security Council unanimously voted for its Resolution 2185 which stressed the importance of international policing in peace operations and requested that the Secretary-General further promote professionalism, effectiveness and system-wide coherence in the policing-related work of the United Nations, including through the development and implementation of standards and guidance through the Strategic Guidance Framework for International Police Peacekeeping. Likewise, the relevant Committees of the UN General Assembly, forming the voice of all 193 United Nations Member States, appreciate both the comprehensive consultative approach and the relevance of this framework for international police peace operations.

So, what is the essence of what we have learned? Our growing repository of guidance can be found online (For starters: See here). It is based on a core principle that can be found in our policy framework, which is fundamentally supported by all Member States, whichever form of justice and security they choose, whatever their culture, history and societal values:

In accordance with United Nations standards, every police or other law enforcement agency should be representative of and responsive and accountable to the community it serves.

Police and law enforcement officials have the obligation to respect and protect Human Rights, including the right to life, liberty and security of person as guaranteed in the Universal Declaration of Human Rights and reaffirmed in the International Covenant on Civil and Political Rights and other relevant international instruments. Pursuant to the UN Code of Conduct for Law Enforcement Officials, police and other law enforcement officials are required at all times to fulfil the duty imposed upon them by law, by serving the community and by protecting all persons against illegal acts, consistent with the high degree of responsibility required by their profession.

Policing must be entrusted to police or other law enforcement agencies of a national, regional or local government, within a legal framework that is based on the rule of law. Thus, the police are accountable to laws that are publicly promulgated, equally enforced and independently adjudicated and which are consistent with international human rights norms and standards. Policing the police requires measures to ensure adherence to the principles of supremacy of law, equality before the law, accountability to the law, fairness in the application of law, separation of powers, participation in decision-making, legal certainty, avoidance of arbitrariness and procedural and legal transparency.

As the police adviser to the United Nations, I believe that every serious discussion about the relationship between the society and the policing model that a society chooses for itself needs to be informed by these guiding principles.”

My other online persona: “All Over The Place With Tiggie“, a Youtube channel @allovertheplacewithtiggie

Entries of a certain month

Here to Inspire and Motivate Others

The Physician Wellness Movement and Illegitimate Authority: The Need for Revolt and Reconstruction

Follow the Progress of a Book in the Making